Virtual Reality has adult entertainment in mind. It has your prurient interests at heart. I mean, when you read or hear about the capabilities of VR, what do you think?

An immersive experience. Making you feel you are there.

Wow, that would be great for adult entertainment!

Allowing you to experience it as though you were really doing it.

Doing adult entertainment, that is!

Allowing you to interact with and control the environment.

I can think of some things I’d like to interact with and control. Gotta get me a headset!

And yet. There’s been a strange, awkward square-dance between VR and adult entertainment. Adult entertainment is supposed to be the wind under the wings of VR, providing platforms and markets. VR, then, should be rushing in, providing the technology and licensing content.

But that has been slow to happen until recently. VR enthusiasts are well aware that technologies such as the Oculus Rift VR headset experienced growing pains through test phases and is currently back-ordered, with a wait list. That means if you were chomping at the bit to experience adult-oriented content in an immersive environment, you may not yet have the hardware. But then there’s the problem of content being there once you do have the technology.

Well. The end of 2016 and 2017 really do figure to be a watershed period in this regard. The technology and the content are coming together, and various interested parties are finding ways to capitalize on the VR adult entertainment craze-in-progress.

These good folks want to bring the future now and to give users intense carnal pleasure. They have produced more than a heaping handful of VR adult entertainment and are trying to push forward into the VR future.

One site named Badoink, for example, has been in the game since the beginning of 2015, and is one of the industry leaders. To produce its VR features, they uses GoPro cameras.

To match the concept of being there, it shoots its videos Point-of-View (POV) style, with the viewer in the position of the male performer, looking at a adult entertainment actress straddling him, etc. (This is a common style in non-VR adult entertainment, which could make the transition smooth for many consumers.) The GoPro is rigged just over the shoulder of the male performer.

This site is helping the distribution of VR along by supporting—in conjunction with the sites on which they distribute the adult entertainment—the whole range of headsets: Rift, Cardboard, Gear VR. Adult EntertainmentHub has started carrying some of the site’s creations for free. Many other videos are available as part of subscription-based sites like NaughtyAmerica.

It isn’t hard to imagine the draw for someone who owns a VR headset. Adult entertainment is all about fantasy, and anything that can take the viewer out of his apartment (with the sound of the neighbor’s dog barking or the housemate coming in and asking if anyone is home) and let him cross into the world of the movie is welcome.

One requirement for an uninterrupted fantasy is graceful interactions with the actress. Rather than watching her interact with the male performer, you are to feel as though she’s whispering encouragement to you. Anna Lee, president of HoloFilm, told International Business Times that her company is sure to bring in the best actresses for VR productions. They need, she said, to be able to really connect with the VR user.

One actress Christie Stevens told Mashable that when shooting VR films, it’s awkward to talk to a male actor who can’t talk back, and that she has to adjust to the way in which the actor is limited in his movements, trapped by the apparatus of the camera.

VR adult entertainment also suffers from the possible sea-sickness of all VR experiences, and that limits things. But sex of any kind is all about working out a few kinks, right?

If The Full-Body Experience Suits You 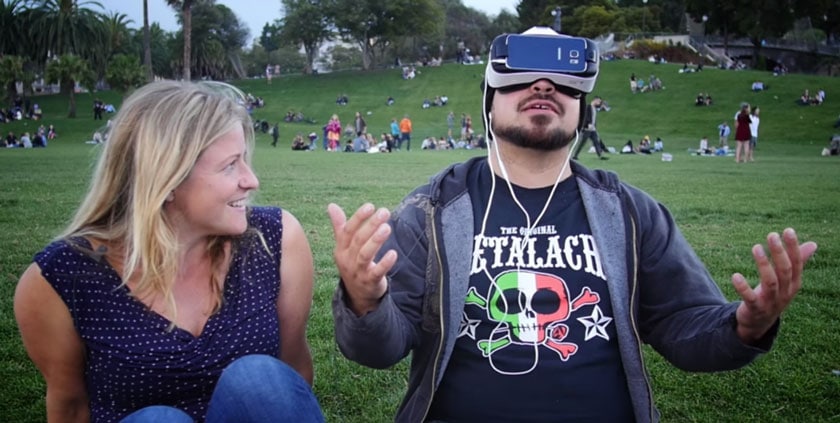 Those in the second category will want to try on the new VR sex suit, brought to the world by the Japanese company Tenga. This suit is all about the high end of the VR experience as portrayed in sci-fi and adventure movies for half a century now. It stimulates the entire body, allowing you to feel in addition to seeing.

The user wears a VR headset strapped around the hood of the white suit. But he’s also strapped with many black bands through which run wires that—yes—send little electrical pulses to the user for the full effect!

The user watches a movie through the headset, and to add some realism, he has a small appliance on his chest that includes rubber breasts that he can touch. The suit is complete with an apparatus that can provide the most intimate stimulation, if the user so chooses.

Now, one wonders if these suits are test models, if you can get one at your local big box outlet, etc. Well, no and no. They are available, but—funny fact—sold out. But they are accessible to quite a few incomes, at a decent $400.

Sharing Your Adult Experience With Others?

One question about VR adult entertainment is the application of it. How much can you share it with friends, admit you own it, etc? Is it something just for the gaming room, and might some potential buyers cave to the stigma that people who are interested in this sort of thing are geeks who live in their mom’s basement?

Well, one notion that makes a certain amount of sense is that VR could be like a lot of things people do while traveling, a guilty pleasure you indulge in expressly because you’re far from home.

That is, might a lot of VR sex and adult entertainment experiences soon take place in hotels? One company—not one for subtlety when choosing a name—VRBangers, wants the answer to be affirmative. VRBangers is now offering an adult VR experience in Las Vegas hotels. It is powered by the auravisor, which the hotel in question would provide as a $20 rental. This variety of visor supports 1080p video and a 100-degree field of vision.

The adventurous traveler puts on the headset, which is loaded with a movie. In it—get this—the user is in the hotel room. There’s a knock on the door and a guy or gal comes in and the VR adult experience begins. It’s perfectly legal is the thing!

The company is, of course, trying to branch out to as many hotels as possible.

As for the Tenga suit and the hotel experience, they show something important, which is that companies are working hard to bring form and function together, as well as seeking out ways to best reach the potential user.

Life is to be enjoyed and to involve exploration, right? And the limitations that we face, VR aims to help us transcend. That’s why adult-oriented VR may constitute some of the most meaningful entertainment-oriented uses of the technology.